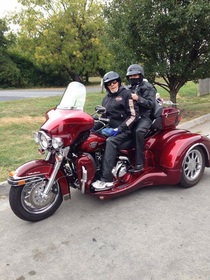 Raymond B. Kempf, 89, of Carlisle, PA passed away Sunday, June 11, 2017 in Carlisle Regional Medical Center, Carlisle PA. He was born June 28, 1927 to the late Carl and Catherine Irene (Miller) Kempf.

Raymond was the former owner and operator of the R B Kempf Trash Removal for over 40 years around Swatara Twp. He was a former member of  St. John Catholic Church. Member of the American Bowling Association and received an award for a game scoring 299. Member of the American Motor Cycle Association, Raymond's first bike was a 1951 Harley Davidson Police motorcycle and his last was a 2008 Harley Davidson Trike. Raymond enjoyed riding and put many miles on his bikes.  Also, he was an avid member of God's Country Black Forest Snowmobile Club. A sports fanatic, he played high school football and was a Dallas Cowboys and Penn State fan. He was also a Pittsburgh Penguins fan and loved watching NASCAR.

Services will be held Thursday, June 15, 2017 at 10:00 AM in the Hollinger Funeral Home and Crematory, 501 N. Baltimore Ave., Mt. Holly Springs, PA 17065. Visitation will be held from 9:00 AM until the time of the service. Interment will follow at Woodlawn Memorial Gardens, 4855 Londonderry Rd., Harrisburg, PA 17109. lieu of flowers, memorial contributions can be made to the Cumberland Goodwill Ambulance Association, 519 S. Hanover St., Carlisle, PA 17013.

To order memorial trees or send flowers to the family in memory of Raymond Kempf, please visit our flower store.