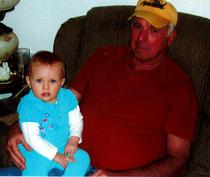 Larry "Snake" McClintock, 76, of Carlisle, passed away Wednesday, July 5, 2017 at his home. He was born August 4, 1940 to the late John W. and Emma Wolf McClintock. Larry is preceded in death by his Wife, Shirley K. Shumway and Sister, Betty Thompson.

Larry lived the majority of his life in Shermansdale, PA, before coming over the mountain to "Possum Flats." He enjoyed hunting, football, "snipin" and gardening. Larry served in the United States Army and Army National Guard during the years 1959-1964. A member of 776 Teamsters and an Over-The-Road Truck Driver for Daily Express, Keen Transport, Airco and several independent owners.

Larry is survived by his wife of 5 years, Maggie (Deihl) Darhower of Carlisle; Son, Cody McClintock of Mount Holly Springs and Daughter, Laurie Kemrer and husband, Zane of Shermansdale. Also surviving is his Step-Son, Neil Darhower and wife, Heather of Carlisle. He was known as "Pa" to six grandchildren, Ryan, Hunter, Elizabeth, Jessica, Hannah and Alyson and uncle to many nieces and nephews.

Services and burial will be held privately at the convenience of the family. In lieu of flowers, memorial contributions can be made to his church, Friends In Christ, 154 Lefever Rd., Newville, PA 17241 or Celtic Hospice and Home Health, 900 Century Dr. #201, Mechanicsburg, PA 17055.

To order memorial trees or send flowers to the family in memory of Larry McClintock, please visit our flower store.