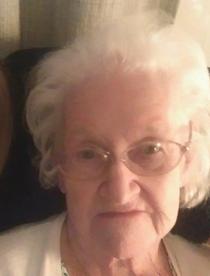 Janet was employed as a cook at the former Tagg Run Restaurant. She was a former member of the Toland Mission Church, loved bingo, embroidery, puzzles, and spending time with her family.

Funeral services will be held Tuesday, April 25, 2017 at 11:00 AM in the Mt Holly Springs Church of God, 602 Mc Land Rd., Mt. Holly Springs, PA 17065 with Rev. Richard Reese and Rev. Dan Murray officiating. Interment will be in the Westminster Memorial Gardens, Carlisle. A viewing will be held one hour prior to the service at the church . Memorial contributions may be made to Kindred Hospice, 4660 Trindle Rd., Suite 204, Camp Hill, PA 17011. Arrangements are being handled by the Hollinger Funeral Home & Crematory, Inc., Mt. Holly Springs, PA 17065. Online condolences may be made to www.hollingerfuneralhome.com

To order memorial trees or send flowers to the family in memory of Janet Kuntz, please visit our flower store.